The Congregation of the Disciples of the Lord

When Archbishop Costantini arrived in China as the First Apostolic Delegate to the country, he was already aware that evangelization to people of this nation of splendid ancient civilization could not be easily done without wisdom and true conviction. Though foreign missionaries had been carrying out their evangelization work in China for over three hundred years, Christianity never took root in the country. Thus, Archbishop Costantini wanted to localize the Church for both the mainland Chinese and overseas Chinese. On 4th January 1927, he applied to the Sacred Congregation of the Propagation of the Faith (the present Congregation for the Evangelization of Peoples) for the establishment of the first Chinese Catholic religious order, the Congregation of the Disciples of the Lord (CDD). The application was immediately approved and CDD began to take in its first candidates. As a result, missionary work to the Chinese in mainland China and overseas through Chinese culture has become the charism of CDD.

Members of CDD devote themselves to consecrated life (Poverty, Chastity and Obedience) and the study of eastern and western cultures. They work in the areas of education, publication, missionary work, evangelization, and social work. CDD provides a new direction for the Chinese people to turn towards God, just like St. Paul who provided a way for the people of Athens, who knew no God, to come to the Lord.

The first community house of CDD was founded in 1928 at Xuanhua District of Chahar Province (the present province of Hebei) in China. Many candidates came to join the order and many who completed their study stayed in the northern provinces of China to serve the Church.

In 1949, with the establishment of new China, came the prosecutions and arrests of the members of CDD. The General House in China was forced to close down and subsequently moved to Taiwan. Since then, CDD began their missionary work in the Archdiocese of Taipei, in which the Archbishop Joseph Kuo, CDD was the shepherd of that time. Besides the works in Taipei, CDD also went to other places in Taiwan, such as Koahsiung, to build churches and serve local communities. Meanwhile, religious members were sent to several countries, such as Indonesia and Malaysia, to build schools and churches for serving the overseas Chinese until today. 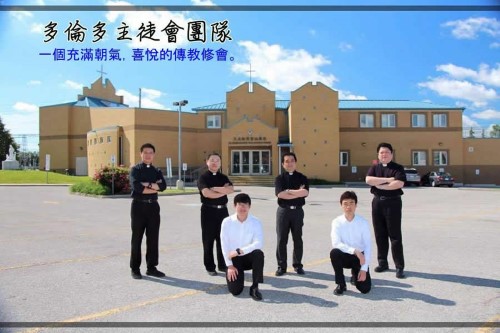 Aims and Special Characteristics of the CDD

The first decade of CDD in Canada